Brock took a half day at work and we picked Emerald up from school and headed to Disneyland. It was 110 outside but we decided to go in the heat hoping it kept the crowds away . . . nope not so much. We had a lot of dole whip which of course the girls did not complain about. We brought a spay bottle to mist the girls so they would not overheat and we tried waiting in lines that were inside or super short. We braved the heat and stayed at disneyland until around 10pm we even made it thru Fantasmic. The girls absolutely loved the show, they were exhausted and could barely keep their eyes open but it was a hit. After the show we walked thru Downtown Disney for our favorite, some steaming hot beignets at the Jazz Kitchen.

After leaving D-land we headed to the beach house in Huntington to stay at for the next three nights. The girls woke up so excited to go play in the ocean and build sand castles. It was in the 80s and there is no a/c where we were staying but we made the most of it and stayed on the beach playing in the water. Emerald and Brock even found lots of baby clams while Violet and I played in the sand. (We used Alba Botanics sunscreen no one got a sunburn, it is amazing stuff, probably one of the best we have found and we have tried so many.) 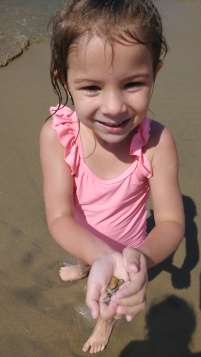 Again we kept cool by eating lots of ice-cream the girls picked cotton candy flavored (oh the food coloring) But it is vacation and Brock and I let them pick their own flavors, no organic to be found.

After spending a couple of relaxing days at the beach we were headed back for another day at Disneyland and this time we went to California Adventure too. At least this time it was only in the 80s although it was twice as packed as it was on Friday. We even waited 70 minutes in line to ride Midway Mania and half way thru waiting Violet started saying she wanted to go home . . . and it was only noon! We made it past the little tantrum and she was so happy to go on the ride. We only had to wait around ten minutes to see the princesses which is one of the girls favorite things, they love talking to the princesses and Violet even sang a song for them. Although she was sad that “Jamins” was not there. 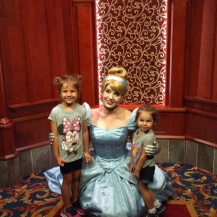 The girls started melting down around 7pm so we headed back to the car of course stopping for our favorite treat of hot sugary beignets. We made it home around 9pm and unloaded the car. I spent all of today doing laundry and sorting thru the crazy amount of crap we had brought with us. Well now it is back to a regular schedule with the girls and hopefully some more fun adventures soon.

Southern California girl. Married to the love of my life and stay at home mommy to my two adorable little girls. Living life to the fullest. View all posts by lifeinourlittlehouse